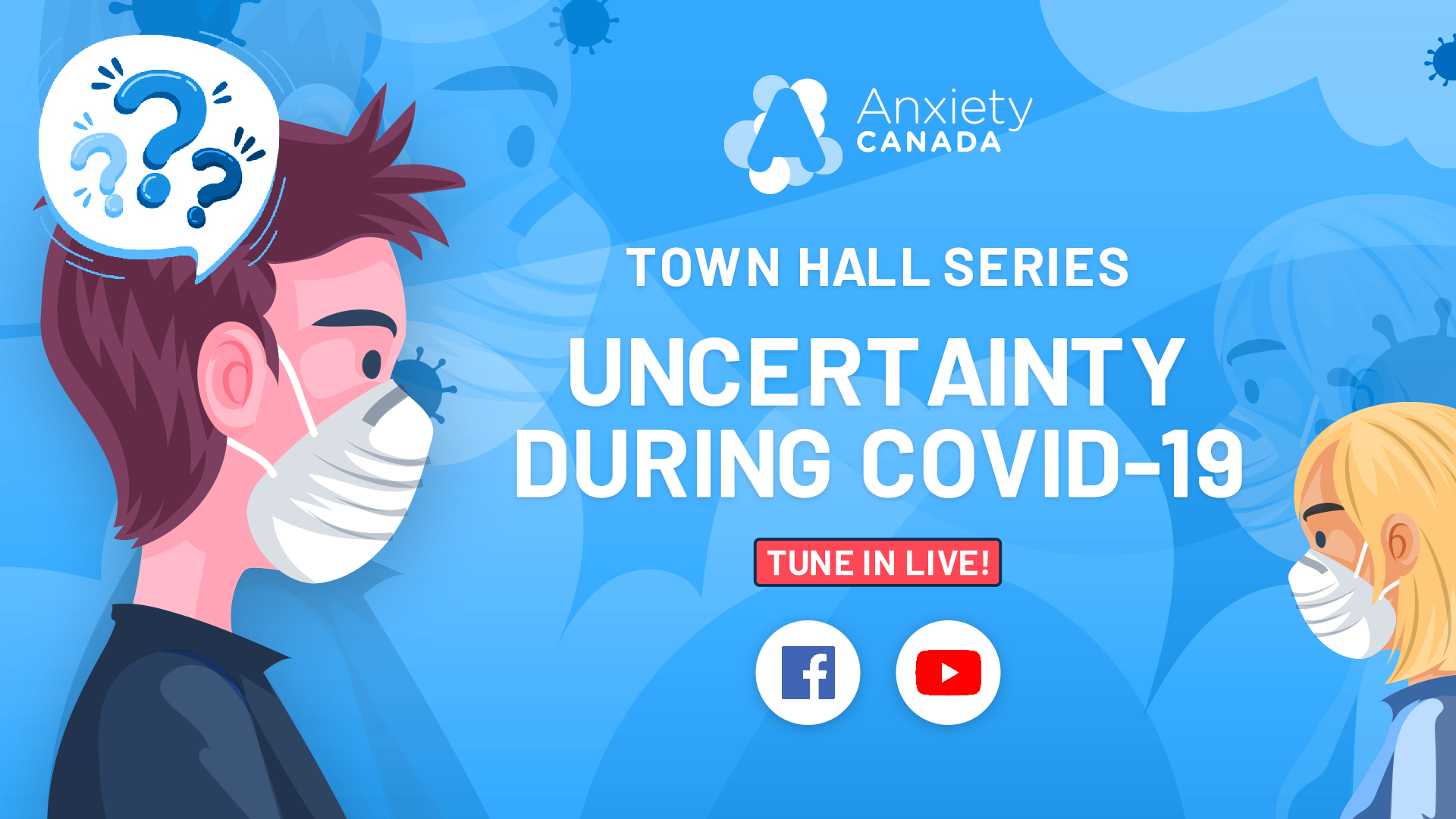 It’s normal to feel uncomfortable with all the uncertainty around us.

Whether it be changes to job prospects, new financial hardship, personal relationships, or worrying about going back to life the way it was, many people are worrying about what the future holds.

For the next few weeks every Thursday from May 7th to 21st at 11am PDT / 2pm EDT, join our panel of experts and host, Corey Hirsch.

They’ll discuss uncertainty during COVID-19, how to deal with it, and give clarity on healthy and unhealthy coping during this pandemic.

You’ll also get the chance to get your questions answered by the experts.

Uncertainty During COVID-19 – Thursday, May 7th:

During this Town Hall, we opened up a dialogue to unpack the idea of uncertainty. What does it look like? How does it relate to worry and anxiety? Why is it important to learn to tolerate uncertainty?

Uncertainty: Returning to the New Normal – Thursday, May 14th

As restrictions are slowly lifted, you might be feeling uncertain about returning to work and the potential health risks that come with it.

During Part 2 of our Town Hall series on uncertainty, we discussed tips to help you adjust to the new normal.

With health guidelines evolving, do you know if your actions like social distancing or wearing masks are going too far, or not far enough?

During Part 3 of our Town Hall series on uncertainty, we discussed “safety behaviours” and the difference between healthy and unhealthy coping.

More info about our featured guests:

A former NHL goaltender, NHL goaltending coach, and Olympic silver Medallist, Corey Hirsch was featured in an article in the Players Tribune opening up about his struggle with Obsessive Compulsive Disorder while on the rise to a promising career in the NHL. He has since dedicated himself to ending the stigma of mental health.

Born in Medicine Hat, Alberta and raised in Calgary, Alberta, Corey was drafted in 1991 by the New York Rangers. He spent three years of his early career with New York where he was an active roster member when the team won the 1994 Stanley Cup. In April of 1995 he was traded to the Vancouver Canucks where he played the majority of of his NHL games all while hiding and battling a mental illness.

After retiring from active play, Hirsch became an NHL goaltending coach for elite NHL goaltenders and prospects for another six seasons with the Toronto Maple Leafs and St Louis Blues. Corey has since transitioned from NHL coach to broadcaster where he currently works for Sportsnet650 as the radio color analyst covering the Vancouver Canucks.

Dr. Robichaud’s area of specialization is cognitive-behaviour therapy (CBT) for anxiety disorders, with a special emphasis on generalized anxiety disorder (GAD). She has published numerous scientific articles and book chapters, as well as co-authored three books on CBT and GAD and excessive worry, for both mental health professionals and consumers.

Dr. Robichaud is a former President of the Canadian Association of Cognitive and Behavioural Therapies (CACBT) and is CACBT certified as an expert in the provision of CBT. She was on the Anxiety Canada Board of Directors from 2006 to 2010, and now serves as a Scientific Committee Member with Anxiety Canada.

Anne Marie Albano is a Professor of Medical Psychology (in Psychiatry) at Columbia University and Founder of the Columbia University Clinic for Anxiety and Related Disorders (CUCARD). Dr. Albano is a Fellow of the American Psychological Association and the Association for Behavioral and Cognitive Therapies, Founding Fellow of the Academy of Cognitive Therapy, a Beck Institute Scholar, and is board certified in clinical child and adolescent psychology. She has published more than 150 articles and chapters and is the co-author of several cognitive behavioral treatment manuals and of the Anxiety Disorders Interview Schedule for Children, all published by Oxford University Press. Her book with Leslie Pepper, You and Your Anxious Child: Free Your Child from Fears and Worries and Create a Joyful Family Life, received a 2014 Seal of Merit from the Association for Behavioral and Cognitive Therapies.

In 1999, Dr. Maureen Whittal co-founded Anxiety Canada and is now co-chair of its Scientific Advisory Committee. Dr. Whittal is a psychologist at the Vancouver CBT Centreand holds appointments in the UBC departments of Psychology and Psychiatry.  She is CBT certified by the Academy of Cognitive Therapy (ACT) and Canadian Association of Cognitive Behaviour Therapy (CACBT).

Dr. Whittal is an acknowledged expert in Cognitive Behavioral Therapy (CBT) and is internationally known for her work in obsessive-compulsive disorder (OCD). Maureen has also lectured and provided workshops to professionals across North America, the United Kingdom, Australia and Europe. Closer to home, Dr. Whittal has trained numerous psychologists and psychiatrists in the assessment and treatment of anxiety disorders from a cognitive-behavioral perspective.

Want to get reminders about our upcoming Town Halls?

Can’t make it? All Town Halls will be recorded and posted here.