Anxiety and The Greatest Generation: Tales of World War II with Eugenie Turner 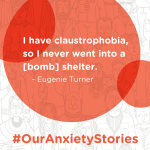 French-Canadian Eugenie Turner was one of few women in the Royal Canadian Air Force selected to serve overseas on a bomber base in the Second World War. There she witnessed horrific crashes, dodged bombings, and worked around the clock on the historic D-Day.

In this episode of #OurAnxietyStories Eugenie discusses her experiences as a World War II veteran, noting that her excitement to enlist surpassed feelings of worry and anxiety. Eugenie shares vivid stories from her time at war, mentioning that although she experienced several bombings, she would not enter bomb shelters due to claustrophobia. Living a life filled with adventure, adversity, and loss, Eugenie notes that during the toughest moments, religion and a higher power are what keep her going. To learn more about Eugenie’s story, check out Elinor Florence’s novel “My Favourite Veterans” and Eric Brunt’s upcoming documentary “Last Ones Standing”.

"When they came back, I had to send a casualty list. This is one part of my job I never really got used to...Just knowing that so many of them didn’t return. "

Looking at the Full Picture with John Hopkins’ Dr. Chisolm