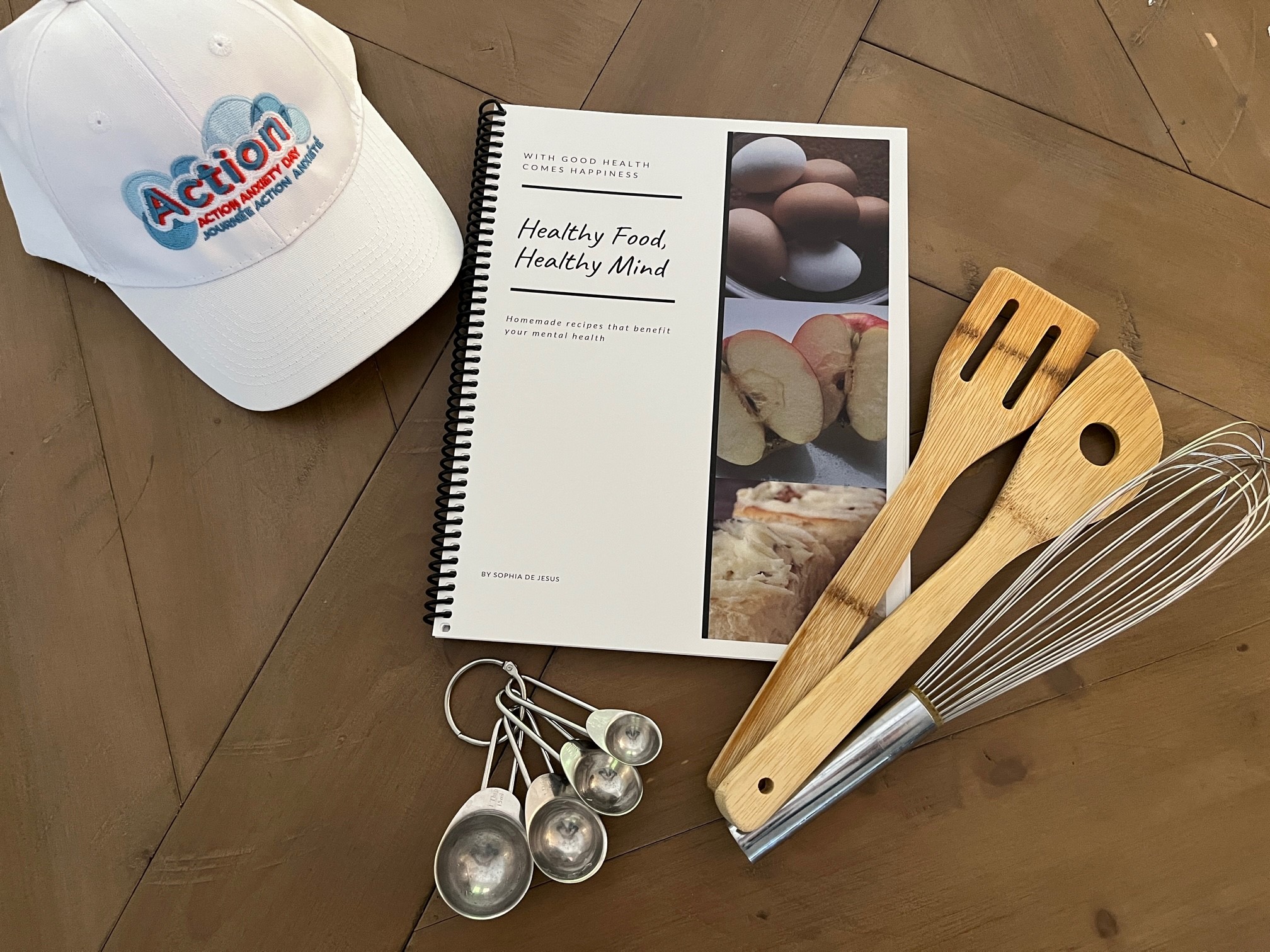 High school senior Sophia DeJesus created a cookbook, Healthy Food, Healthy Mind, and donated 100% of the proceeds to Anxiety Canada to support our anxiety management programs. Justine, our summer Community Engagement Contributor, interviewed Sophia to learn more about her inspiration for the cookbook and why the work Anxiety Canada does is so important to her.

During the pandemic, many of us had to come up with creative ways to de-stress. School and many jobs became remote, community centres closed, and restaurants only delivered. The places and activities people had relied on for human connection and to unwind after a difficult day were no longer an option.

Sophia DeJesus, currently a senior in high school, put it perfectly: “Gyms weren’t an option, pools weren’t an option… So people would just kinda sit on their couch and go ‘Okay. What next?’.” After becoming overwhelmed by what seemed like a constant stream of bad news regarding the pandemic, Sophia knew that she had to find a positive way to channel her energy. For Sophia, that was cinnamon buns.

Sophia found a cinnamon bun recipe from a family friend in her cupboard and decided to channel her anxious energy into making a delicious baked good. However, after pulling them out of the oven, she noticed that the dough had not fully baked and they were raw inside. But it didn’t matter to Sophia; “I [felt] so accomplished and motivated. I was like, ‘Tomorrow I’m going to try again. I’m going to get this.’”

In order to graduate, students in BC must complete a Capstone project on the topic of their choice. Some students use this opportunity to learn to sew or to write a research paper.

For Sophia, this was an opportunity to share her love of baking and cooking and her newfound wisdom of what it can do to improve your mental health, as well as raise some funds for the cause. Combining the two subjects, she began drafting a cookbook.

After months of research, filing through a huge list of possible recipes, and seeking guidance from her school counsellor, she was finally able to share her new product – Healthy Food, Healthy Mind – with her community. 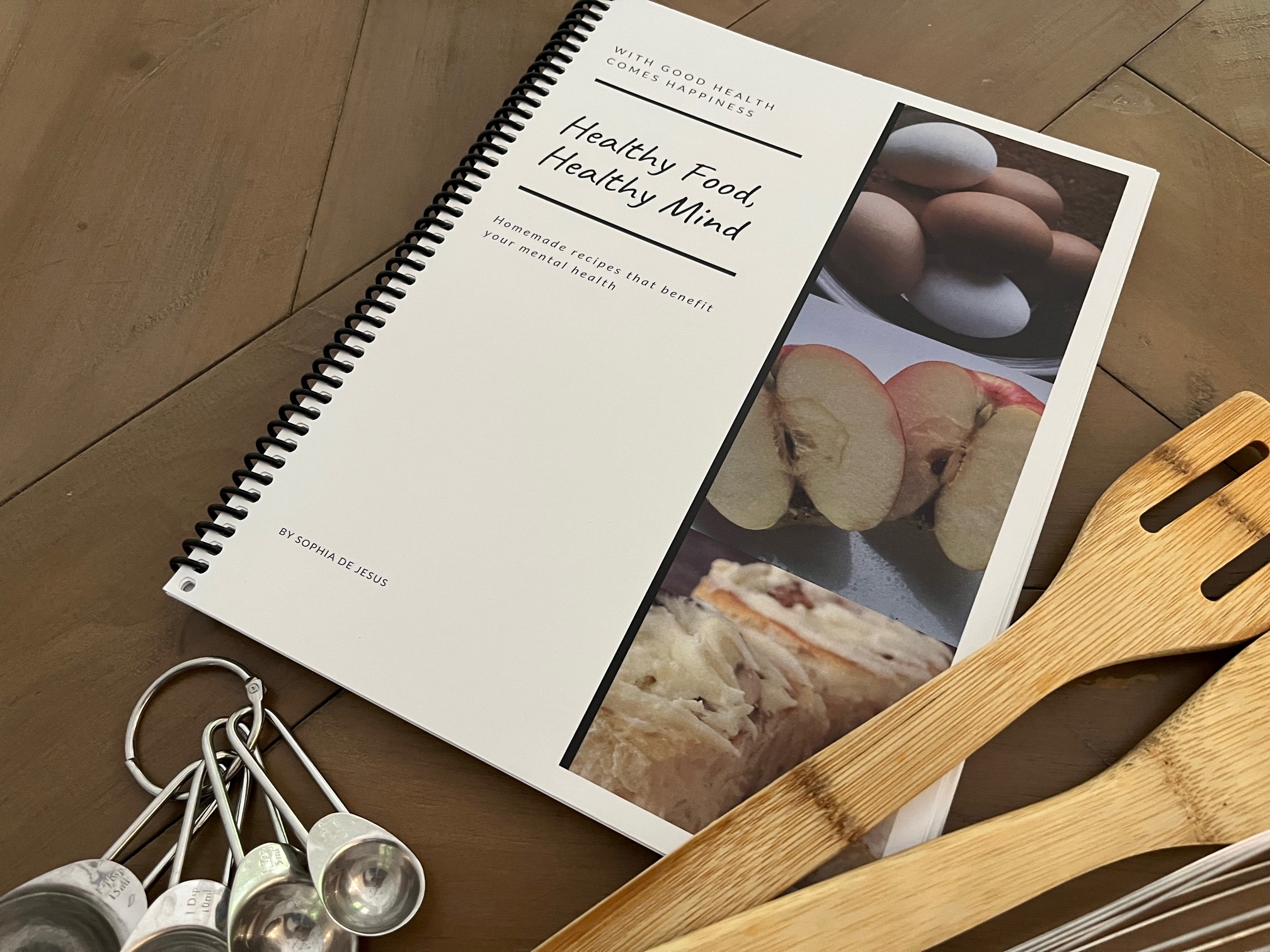 Especially in our generation, I’ve noticed that we are quite aware of mental health and supporting each other, so I wanted to give that a little boost. Okay Gen Z, we need to help the rest of the world and create better awareness!

Sophia posted on social media to see if people were interested in buying one and contributing to the cause; she received many more replies than she thought possible.

Using her school’s printer, she printed and distributed upwards of 60 cookbooks in her community.

When prompted with the option to distribute the book digitally, Sophia said “To have a nice book that’s durable and ready to go… that’s much better than with your dirty hands, scrolling on your phone.” 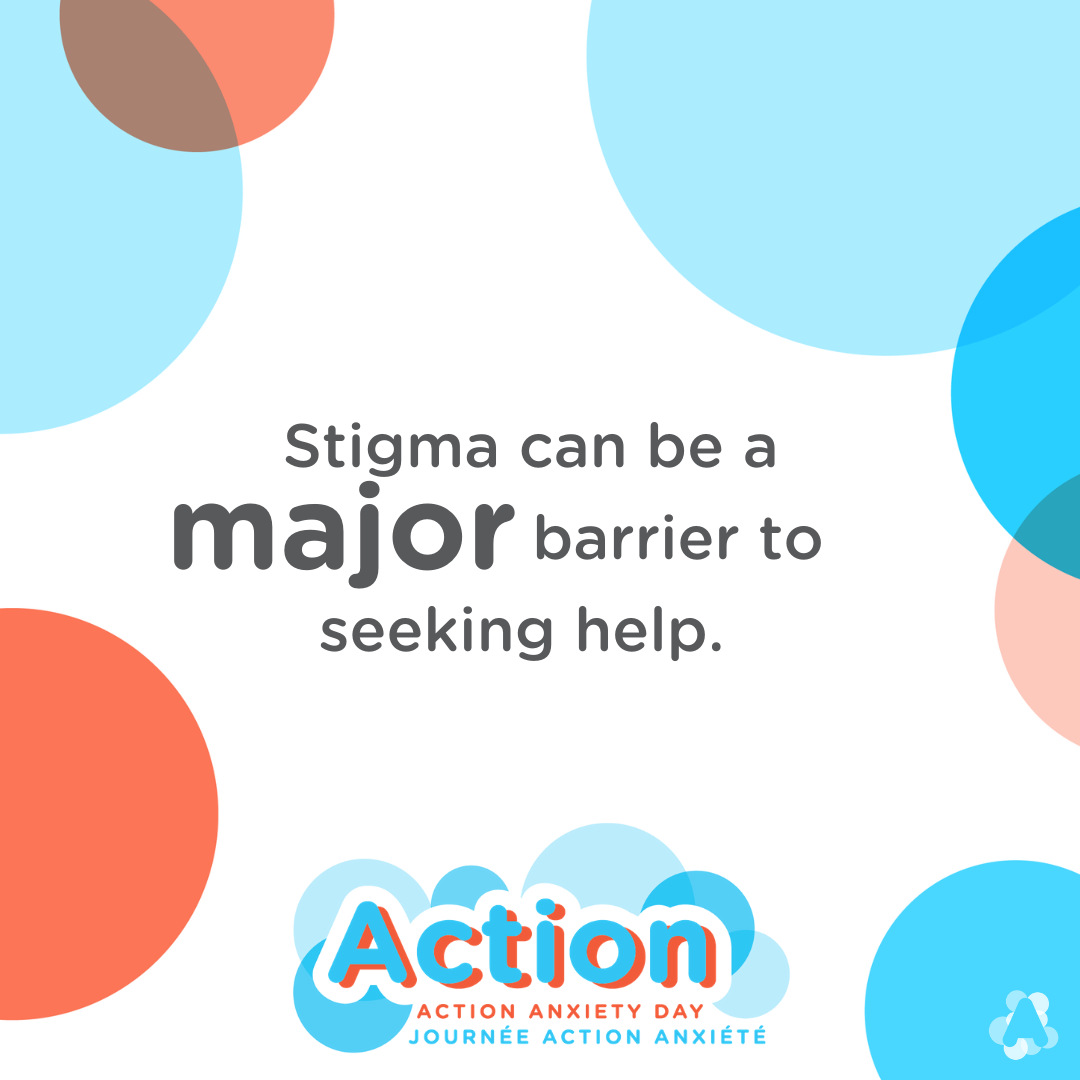 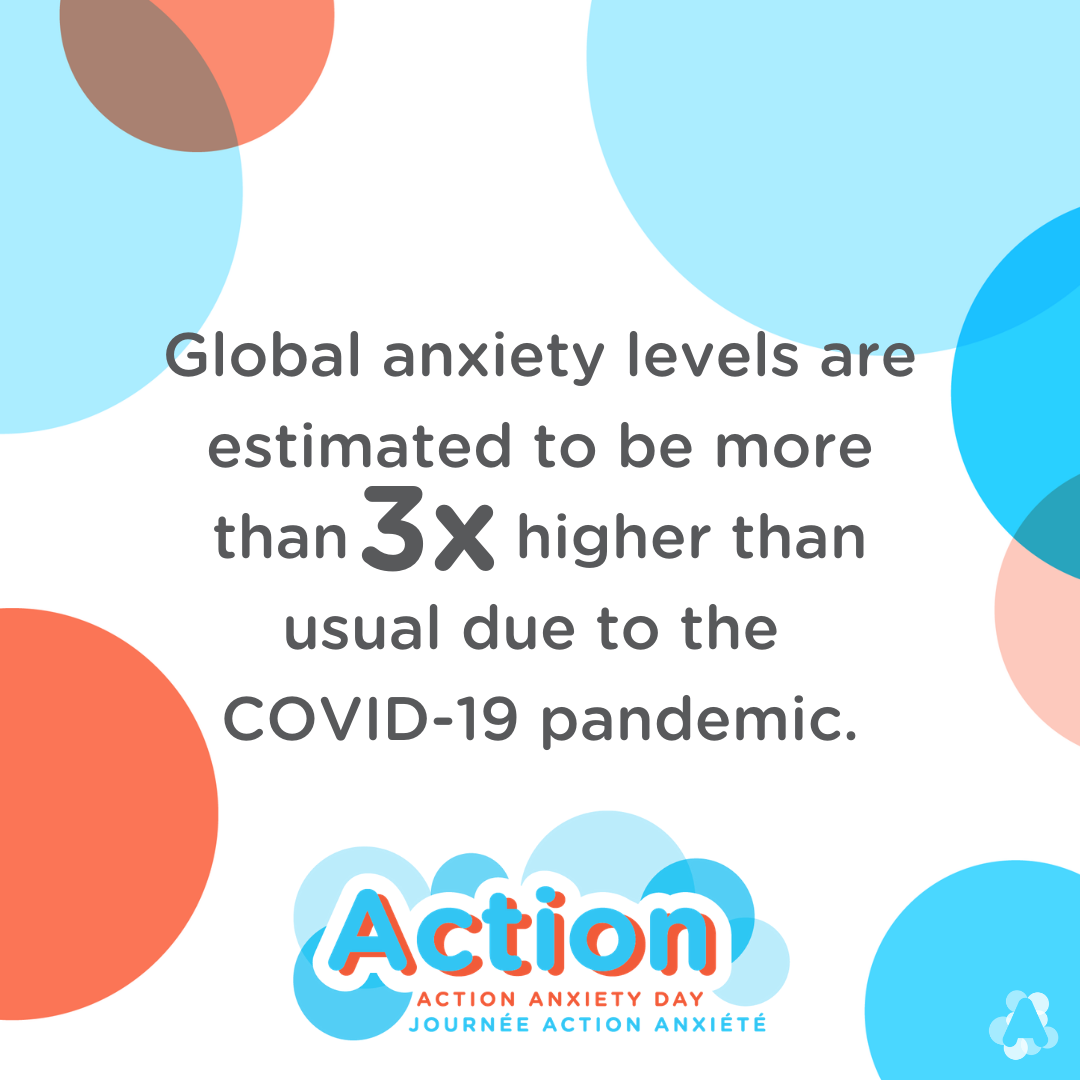 Everyone experiences mental health challenges at some point in their life, some worse than others. However, talking about it can be difficult, as there is a stigma surrounding it. “If it’s so common, why isn’t this a common topic?” said Sophia.

“I didn’t care how many cookbooks I sold because I just wanted people to feel comfortable talking about it and know that they’re not alone.”

Sophia hopes that by spreading awareness, she can help create a safe environment for people struggling to come forward so that everyone can help them.

Sophia donated all of the funds raised by selling cookbooks to Anxiety Canada. These funds sponsored a person to receive 12 hours of therapy in the MindShift Groups Program offered by Anxiety Canada, as not everyone can afford therapy.

We’re so thankful Sophia chose to donate the funds raised through her cookbook to Anxiety Canada, and that she took some time to chat with us and share the details of her project. 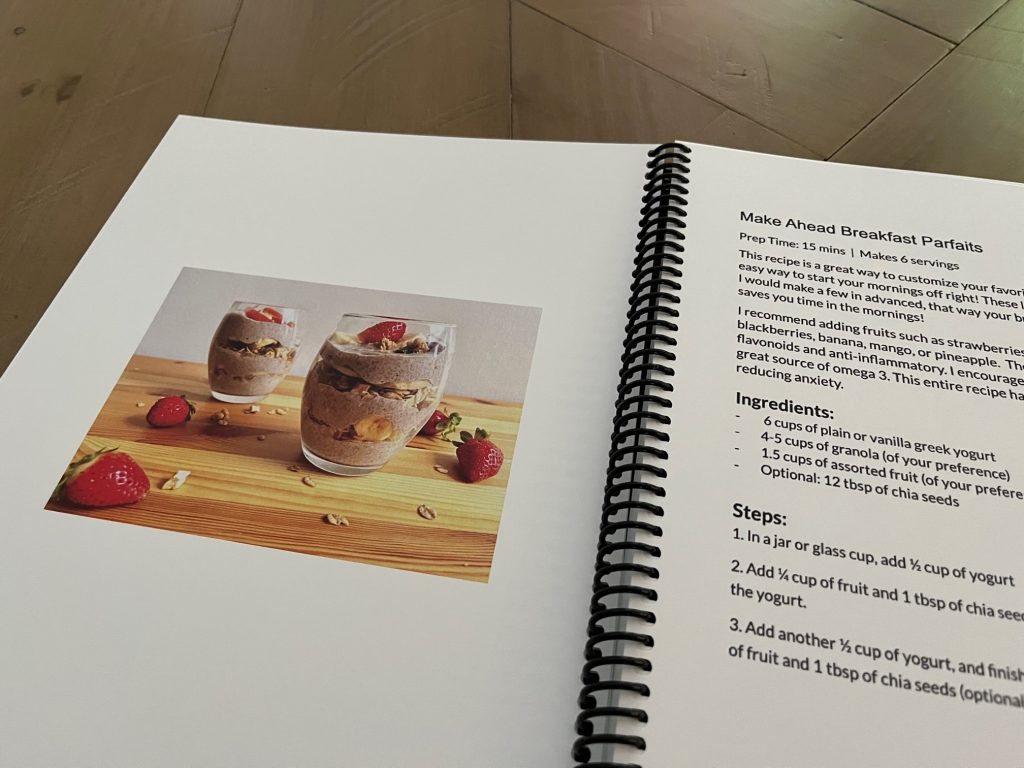 A recipe from Sophia’s cookbook called Make Ahead Breakfast Parfaits

Are you passionate about mental health like Sophia? Here are some ways you can help and participate in our worldwide anxiety awareness day, called #ActionAnxietyDay:

Awareness/Advocacy – Raise awareness of anxiety by sharing your anxiety story, with help from our tools, including suggested posts, hashtags, and frames. Learn more here.

Colours – Wear blue and orange on June 10 to show your support (bonus points if you use our #AAD22 toolkit, or take a selfie and tag us on Facebook, Instagram, Twitter, and LinkedIn)!

Treatment – Raise funds (fundraise with us in a personal challenge!) to develop trusted evidence-based resources and affordable treatments for children, teens, and adults.

And don’t forget to sign and support the Action Anxiety Day proclamation! 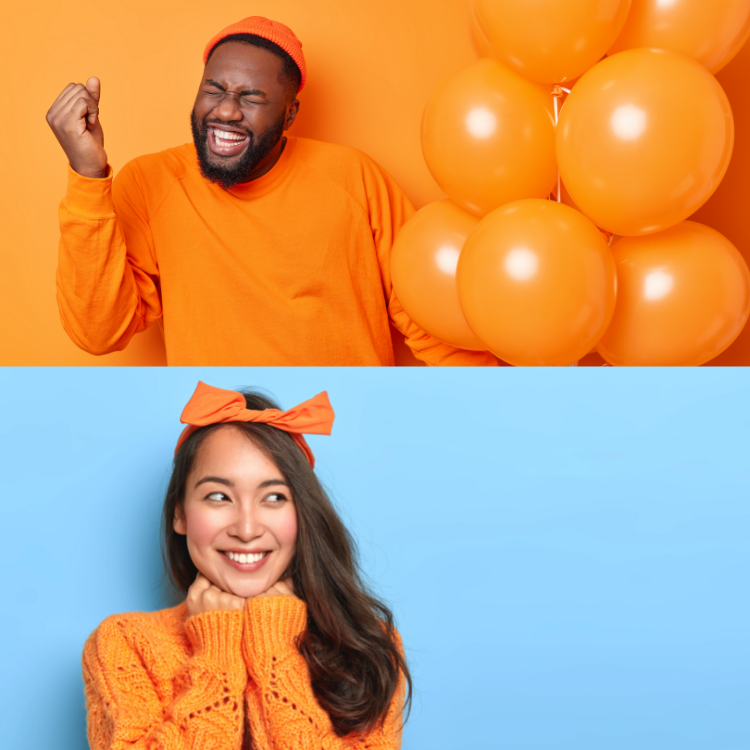