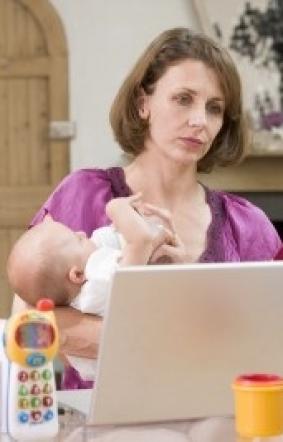 Ellen, a 37-year-old mother with a 5-year-old daughter, lives with her boyfriend. Two months ago she gave birth to their son, Kieran.

For the first 12 hours of labour, Ellen progressed well. Then her doctor discovered that the baby’s heart rate had excessively dropped and was not recovering. The medical team was concerned that the umbilical chord might be wrapped around her baby’s neck. Ellen was quickly wheeled into the operating room for an emergency C-section. The staff moved quickly around her, but did not look at her or tell her what was happening. During this whole ordeal, she was panicking and trembling uncontrollably. She felt out of control and frantic with worry about her baby. Everything was happening so fast. Ellen had always been terrified of having a C-section. She thought that she or the baby was going to die.

Ellen and Kieran stayed in the hospital for five days, recovering. Eventually they were both allowed to return home. For the first few weeks Ellen felt strangely numb and calm. Then, out of the blue, she started to have flashbacks of being wheeled into the operating room. Several times a day she relived her experience of labour, going over every detail in her head again and again. What went wrong? What did she do wrong? How could it have been different?

She would also have nightmares about her birth experience and wake up drenched in sweat with a racing heart. One minute Ellen would feel panicked and frightened, and the next minute she felt such intense rage that she would verbally snap at whoever was close by. Her relationships with her boyfriend and daughter were suffering.

Now, certain words and images trigger her. Whenever she hears an ambulance her heart races, she has difficulty breathing, and she becomes teary. Once she tried driving past the hospital, but she started shaking so much that she had to pull over. She also avoids watching any TV shows about birth and new moms. She stopped reading, which she used to enjoy doing a lot, because she can’t seem to focus on anything anymore. The hardest part for Ellen, however, is that instead of feeling positive and loving toward Kieran, she feels numb. She just wants to feel like herself again.