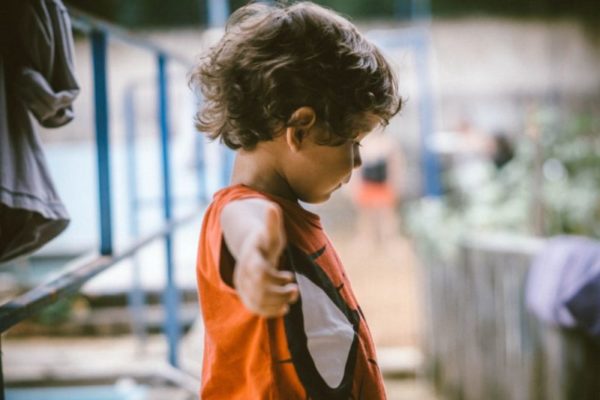 “Completely overnight, my daughter is possessed by all these new obsessions and compulsions. This morning she spent an hour in tears rearranging her books over and over. And yesterday, she screamed about her clothes suddenly being too tight. She is petrified when I leave her, and she follows me around the house yelling at me to help her. But everything I do is wrong. She won’t even eat her favourite foods, and last night for the first time since she was three years old she wet the bed! She’s just not herself anymore. What’s going on? What should I do?”

Both PANDAS and PANS are only recently becoming recognized by medical professionals, who in the past may have overlooked these conditions because of a lack of knowledge, and/or because how similar the symptoms are to other conditions (such as ‘typical’ OCD).

The prevailing hypothesis is that PANDAS is caused by an autoimmune response to a strep infection in the body. Interestingly, it is not the strep bacteria itself that is the culprit, but rather the body’s immune reaction to the strep that is appears to be causing inflammation in certain areas of the child’s brain (such as the basal ganglia).

PANS is a more recent and broader diagnostic category used when a bacterial infection other than strep is creating the autoimmune response and resulting inflammation in the brain. These infections include Lyme Disease, mononucleosis, H1N1, and mycoplasma.

For BOTH conditions, however, the key feature is that the inflammation is creating sudden and drastic behavioural and mood changes in a child. For example, children may start having (or have a noticeable increase in the severity of) obsessions and compulsions, tics (I.e. particular motor or vocal movements), extreme irritability and sensitivity, and in some cases, regression of developmental skills (e.g. poor handwriting, bedwetting). In contrast, in ‘typical’ Obsessive Compulsive Disorder or OCD, obsessions and compulsions develop more gradually and may take months or even years to become obvious to the sufferer and loved ones.

What are the symptoms of PANDAS/PANS?

Children will most frequently have an acute and sudden onset of obsessions and compulsions (for example excessive contamination fears and handwashing, over focus on need for things to feel or be “right” resulting in ordering or checking behaviours) and/or tics.

Other associated symptoms include:

How is PANDAS/PANS diagnosed?

Unfortunately, there is no conclusive blood or neurological test to detect PANDAS/PANS. Laboratory tests can only tell if there is a current or past strep or other bacterial infection (which may or may not be related to the symptoms). Currently, diagnosis is still open to subjective interpretation and primarily relies on clinical observation by professionals, parents, and educators.

To test for the possibility of PANDAS/PANS, your family doctor will likely first complete a physical examination, starting with a test for strep via throat swab or possibly blood test for antibodies. In some cases, depending on the test results, your doctor may continue searching for other bacterial infections.

In addition, your doctor will take a clinical history of behavioural and mood-related symptoms, which usually takes considerable time to conduct. Of particular importance for diagnosis will be:

How is PANDAS/PANS treated?

If strep is detected, the recommended first line of treatment is a long course of antibiotics usually prescribed at a high dose to get rid of the strep bacteria (and thus halt the development of strep antibodies). This alone can lead to dramatic improvement in some children, usually within 4-6 weeks.  If symptoms improve, a child can be weaned of antibiotics gradually. If there is a reoccurrence of symptoms, the child can resume the course as needed.

In more severe cases that are not responding to a long course of antibiotics, more intensive treatment options may include plasmapheresis (the exchange of blood plasma) or IVIG (intravenous immunoglobin), which involves receiving concentrated amounts of antibodies from healthy blood donors.  In both of these treatments, the “offending” antibodies are removed from the blood.  Some preliminary research shows that both procedures can be effective in treating strep-induced OCD and tics.

Your doctor may recommend that your child receive Cognitive Behavioural Therapy (CBT), and more specifically Exposure and Response Prevention (ERP) to help manage the obsessions and compulsions.  CBT and ERP are psychological treatments that have been shown to help children with anxiety and OCD. Importantly, these approaches also provide guidance to parents and educators on how to best support the child at home and school.

Sometimes, anti-anxiety medications (such as Selective Serotonin Reuptake Inhibitor or ‘SSRI’s) are recommended in conjunction with psychological treatment. While it is generally more common to ‘wait and see’ how a child will first respond to psychological treatments, for some children, anti-anxiety medications can make it possible for a child to better engage in the treatment process.

Parents may consider having a child showing symptoms evaluated by an Occupational Therapist if fine motor skills or coordination has noticeably deteriorated (e.g. handwriting). Some children with PANDAS/PANS may benefit from temporary school accommodations while receiving treatment.

What is the prognosis?

Many children who get treated for PANDAS/PANS make a complete recovery. However, some children with more persistent symptoms may have a “flare up” again with new future infections. In some cases, symptoms can actually get worse with each infection and as such, as a preventative measure, physicians and parents may decide to weigh the costs and benefits of continuing on antibiotics for a very long period of time, even until puberty.

There is currently no way to predict exactly how each child will be affected over the longer term. Researchers are continuing to develop hypotheses about the causes and contributing factors of PANDAS/ PANS, and there are ongoing studies that will eventually lead to a better understanding of the condition.

What should I do if I think my child has PANDAS/PANS?

For more information and resources on PANDAS/PANS

Maloney, B. A. (2013) Childhood Interrupted: The Complete Guide to PANDAS and PANS
Pohlman, D. & Thienemann, M. (2016) PANDAS and PANS in School Settings: A Handbook for Educators